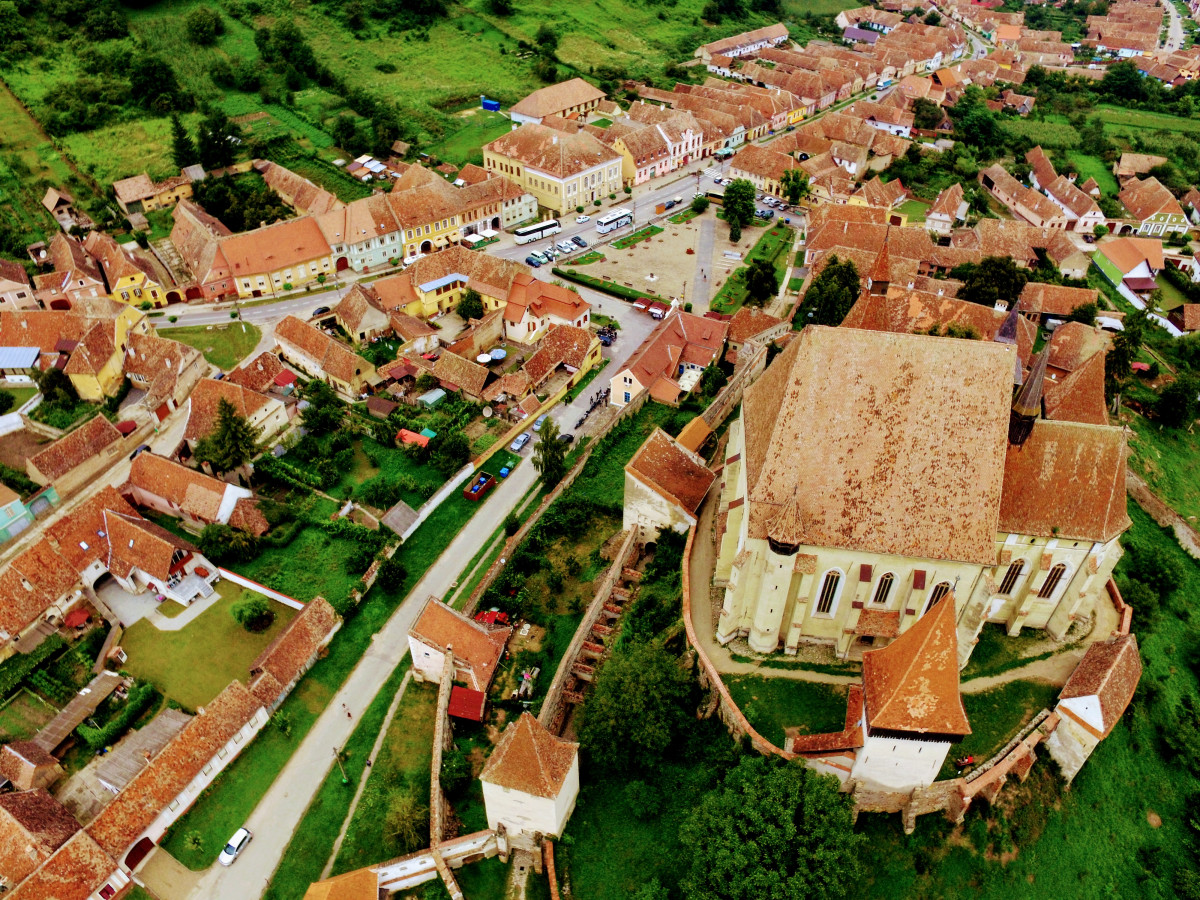 Biertan is the place you want to visit if you want to understand the rural life of Transylvania. Biertan in one of the oldest villages, attested from 13th century. The position of the village surrounded by vineyard hills, the citadel-church, the village life, everything creates a perfect picture of a place lost in time.

The fortified Church in Biertan is the most important church of this kind in Transylvania. It was the first to be part of UNESCO Heritage and it has also some specificity that make it magnificent.

The church represented more than a religious place, it was the center of the community. People would store their goods, would punish the ones that disregard the rules, it institutionalize the marriage and the divorce, and one of the most important feature, it protected the people and the wealth of the village. It was the cultural, social, religious and defensive center of a community.

As the name indicates, this kind of building serve more that one purpose. During peace time they are the center of the religious life (and not only), while at war, they acted as a citadel with the defense system in place and also it had to sustain life inside for weeks and to ensure food and water while.

Taking a stroll around the wall is quite a journey due to the arcades that reinforce the walls and creates the feeling of a covered promenade with plants growing in walls.

There is a one of a kind lock created by the Saxon craftsman in 1515. It was a work of a genius and still today it is appreciated due to its complex mechanisms and time enduring resistance. It received an award at the Paris World Expo in 1900, almost 400 years after it was created and still raises the curiosity of people. The closing system engages 19 locking points and it was effective in protecting the wealth of the church so many centuries.

There is a prison-like room where couples that wanting to divorce were forced to live for two weeks disposing only of one fork, one spoon, one chair and a single bed, but no knife.

The purpose was to make the couple revise their decision to separate. Apparently it was a highly successful tactic since only one couple in 300 years decided to go through with the divorce, all the others reconciled. Or so the legend says.

The Covered Stairs of Biertan Church

Biertan Church is positioned on the top of the hill in the middle of the village. In order to reach the church you need to climb some 50 stairs. The stairs are covered, creating a passage that will get the people on top of the hill at the church entrance level. The stairs resemble the Covered Stairs in Sighisoara, only they are smaller.

The church was Roman Catholic in the beginning, afterwards becoming Lutheran after Reformation and all the painting were covered according to the new beliefs. After the renovation the painted ceiling was discovered and restored so we can admire it today. One interesting detailed: search for the joker.

I found some great piece of woodwork in the church doors. Take your time and discover what else the craftsmen have to offer in the details of this amazing creation.

View of the village

As the church is position on the top of the hill to help with the resistance in case of attach, one of the great reward of the stairs you have to climb is the view of the village. The life you can admire from above. The smoke in every chimney, the order of life in the

How to get to Biertan

We visited Biertan Fortified Church 3 times, each in a different season. One of the visits was an itinerary that includes all 6 Fortified Churches from Transylvania that are included in UNESCO Heritage

Stay the night in Biertan

Do stay one night in the village to be able to see the church at night lit and dominating the hole village from above. You have a lot of option in the restored houses.

If you plan a trip in Transylvania, don’t forget about: Turda Salt Mine and Mohos Peat Bog .